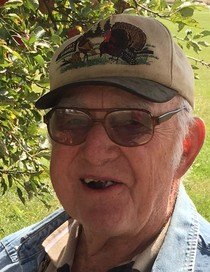 William T. Kruger, Sr.,92, of Kinsman passed away December 19th at his home surrounded by his loving family.
A visitation will be held from 9 a.m. to 11:30 a.m., on Monday, December 21, at Sacred Heart Catholic Church in Kinsman with a funeral mass and Rite of Christian Burial to immediately follow.
William was born January 8, 1923 in Brookfield Township, the son of Carl and Lillian Kruger.  He married Marjorie McCambridge on June 16, 1945 at Sacred Heart Church, Kinsman.  She preceded him in death on April 29, 2007 after being lovingly by his side through 61 years of marriage.
William (Bill Sr.) is survived by four daughters, Linda Bookout, Kinsman; Sandra (Rich) Roenfeldt, Ottawa; Karen (James) Hopp Dayton, Ohio; and Pamela (James) Siedentop, Ransom.  He is also survived by 15 grandchildren and 22 great grandchildren.
Angela (Mike) Owen and June Woods; Jennifer(Brad) Brayden, Trevor and Jace Jensen;  Elizabeth(Neil), Sylvia, Juliet, and Hammond Narut; Sarah (Bryan) Josh and Anna Harper; Greg (Tara) Roenfeldt; Becca (Adam) William, Nicolette, and Charlie  Stewart;  Kris (Kirby) Grant and Kate Woods; Kurt (Kelly) Bailey and Kenley Kruger; Kelly Kruger; Jessica Hopp; Stephanie (Tucker) Myla and Clara Frey; Amy (Eric)  Kailey and Raylan Smith; Kevin(Kelly)Siedentop and Gregg Harrison; David (Cassie) Siedentop and Rachel (fiancé Frank Erschen) Siedentop.
Bill was preceded in death by his parents, six brothers and, the love of his life, Marjorie.  In March 2015 and May 2015 respectively, he was preceded by his daughter in law Marilyn Kruger and son William Kruger, Jr.
Devoted to his family, Bill was a loving husband, father, grandfather, and great-grandfather. He and Marjorie instilled this love of family in their children and grandchildren. Whether it was while farming with his son and grandson, through quiet time spent by the farm pond with a fishing pole and grandchildren, during the annual Krugerfest celebration each summer, or by attending church then coming together with family after, his days revolved around the ones he loved.
After family, farming was his passion.  Bill was one of God’s devoted caretakers of the land, with sunrise turning to sunset over his fields and each passing day beginning and ending on the farm. The love and appreciation of the land and farm life was passed along to his children. He taught his children and  grandchildren how to drive a tractor, husk corn, and bale hay always making sure each got to experience the joy of farming and appreciate the gifts of nature.
A resident of the Ransom and Kinsman area all of his life, he dearly loved the people there and always took time to stop and visit or help a neighbor.
Bill was a faith filled man and a current member of Sacred Heart Church in Kinsman and a former member of St. Patrick’s Catholic Church in Ransom. Over the years, he was a member of the Lion’s Club, Ransom Fire Department, and was President of the Kinsman Telephone Company. In addition to farming, he also was a Pride Seed Corn salesman and worked for the Rodowski Meat Locker.
During his final weeks, he was assisted by wonderful caretakers who made his final days easier.
Bill Kruger Sr. will be missed dearly by those who knew and loved him. Everyone who remembers Bill is asked to offer a prayer in his memory this Christmas as Heaven calls one more special angel home.

To order memorial trees or send flowers to the family in memory of William Kruger, Sr., please visit our flower store.