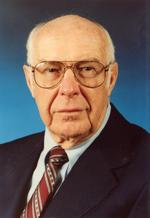 LACON- Thomas J. “Tom” Adams 95 of Lacon died Friday evening (Apr. 6, 2012) at St. Joseph Nursing Home, Lacon.
At Tom’s request there will be no visitation. Memorial Services will be held at 11:00 AM Saturday June 9, 2012 at the Lacon-Sparland United Methodist Church, Lacon with Rev. Gloria Davis, officiating. Hagi Funeral Home, Streator is in charge of arrangements.
Mr. Adams was born Jan. 23, 1917 in Streator the son of John and Jessie (Dunn) Adams. He married Caroline Carman, July 26, 1940 at Park Presbyterian Church, Streator. She preceded him in death Mar. 5, 2002.
Tom had been employed by Public Service Co. of Northern Illinois in Streator upon graduation from Streator High School in 1937; he spent the next forty four years employed by Public Service, Commonwealth Edison and Cilco, in Streator, Joliet and Peoria, working as a supervisor in sub-station and line construction, retiring in 1981. He served as president of the Lacon Rotary in 1972 where he was active with the Boy Scout program. He was elected Lacon Businessman of the Year in 1974 and had been active with the Cilco retirees, Lacon Community groups and Streator High School, class of 1937 as well as being an accomplished woodworker. Tom served in the US Army Rainbow Division of the 42 nd Infantry during WWII.
He is survived by two daughters, Linda (Dwight) Baum, Tucson AZ and Carole (Eugene) Skaggs, Milwaukee WI, four grandchildren, nine great grandchildren and one sister, Helen Hayes, Streator.
He was preceded in death by his parents, wife, two sisters, Mary Blakemore and Elsie Hearn and three brothers, Bob, Glenn and Jack Adams.
Memorials may be made to the St. Joseph Home, Development Committee, 401 9 th St. Lacon IL 61540.
To order memorial trees or send flowers to the family in memory of Thomas Adams, please visit our flower store.