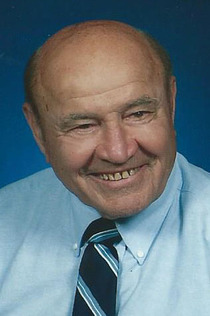 STREATOR-  Theodore G. “Ted” Bakalar, 84, of Streator was born to eternal life Tuesday at 4:30 in the afternoon Dec. 17, 2013 at Heritage Health, Streator.  His family was with him when peace crossed his face and joined his wife Georgia of over 50 years.
Funeral services will be held at 1:00 PM Sunday at St. Paul’s Evangelical Lutheran Church, Streator with Rev. Roger Hurlbut, officiating. Visitation will be from 3:00-6:00 PM Saturday at Hagi Funeral Home, Streator. Burial with full military rites conducted by members of American Legion Post # 217 and Veterans of Foreign Wars Post # 1492, will be in Hillcrest Memorial Park Cemetery, Streator.
Mr. Bakalar was born Jan. 23, 1929 in Streator the son of Michael and Anna (Soltis) Bakalar. He married Georgia Beavers, June 24, 1950 at St. Anthony of Padua Church, Streator. She preceded him in death Jan. 11, 2003.  Not a day has passed that he hasn’t missed her.
Ted’s political career was driven by his commitment to and concern for the people of Streator.  He served as building inspector, city commissioner and was elected to three terms as Mayor of Streator from 1971 to 1983. He sought funding for Streator in Springfield and Washington D.C. to widen Route 23, build a dike at Westgate Plaza, build a new city hall, purchase James Street property, install the tornado warning system, build senior housing and child daycare center and the dredging of coal creek and prairie creek to ease flooding.  As a brick mason, he laid block and brick with the talented and hard workers of his community. He later was a salesman for Streator Brick Co. until the plant closed in 2004. He was an active member of St. Paul’s Evangelical Lutheran Church, Streator. He was a boxer and football player in high school.  He fought in the Golden Gloves and was coach and manager of the Streator Championship Boxing Club.   He served in the US Army in Austria as tank commander on the border of the Soviet Union.  Ted attended Streator grade schools and graduated from Streator High School in 1947.
He loved country music and riding horses on trail rides.  He was a great swimmer and in his childhood, spent much time swimming the Vermillion River.  He sang and whistled.  Some of his favorites were “Thank Heaven for Little Girls,” “A Room Full of Roses,” “Bad, Bad Leroy Brown,” and “Frosty the Snowman” for his grandchildren. He “trained for boxing” until the week before he died.  We could find him riding his stationary bike, lying on the floor throwing his medicine ball, doing leg lifts and maintaining his boxing moves.
He is survived by three daughters, Gail (Steve) Newcomb and Diane Martin both of Streator and Laurine (Geno) Caffarini, Ottawa, eight grandchildren, Douglas (Sheila) Swanson, Theodore (Ashley) Swanson, Katie (Chris) Thompson, Abigail Newcomb, Nicole (Steve) Truckenbrod, Brianna and Mitchell Caffarini and Stephanie Martin and ten great grandchildren.
He was preceded in death by his parents, wife, sons-in-law Jack Martin and R. Craig Flavel, five sisters, Mary Remeta, Irene Bakalar, Louise Higgins, Pearl Hill and Anna Renner and three brothers, Michael, John and Andrew Bakalar.
Pallbearers will be Douglas and Theodore Swanson, Mitchell and Geno Caffarini, Chris Thompson, Steve Truckenbrod and Steve Newcomb.
Memorials may be made to St. Paul’s Evangelical Lutheran Church or to the donor’s choice.
His famous quote was “Do you need anything?...Anything? I’m right here – Just call.”

To order memorial trees or send flowers to the family in memory of Theodore Bakalar, please visit our flower store.