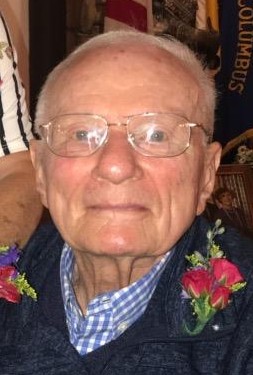 Sherman J Weiss, age 86, of Streator passed away peacefully at home Wednesday, September 23, 2020.  Sherman was born May 20, 1934 in Chicago to Ernest and Myrtle (Michaels) Weiss.  He was raised in Goodland, IN and the family moved to a farm on Gentlemen Road in Ottawa when he was 12 years old.

Sherman graduated from Marquette High School and attended the University of Illinois in Champaign-Urbana where he studied music. He was a trumpet player and a member of the Marching Illini Band.  He also enjoyed playing his grand piano.  He, along with U of I band director, Gary Smith, founded the Marching Illini Alumni Band. He gave private instruction to his seven children on their various instruments every Sunday.

Sherman married the love of his life, Marilyn J. Ayers, on July 24, 1954 at St. Columba Church in Ottawa.

He went into business in Streator, eventually founding an insurance agency.  His entrepreneurial spirit lead him into the oil business, farming and real estate.  He enjoyed boating on the Illinois River and was also a pilot, flying a Beach Bonanza for many years.  Sherman and Marilyn enjoyed wintering in Florida where they were well established in the Singer Island area.

Visitation will be from 9:00 to 11:00 AM Saturday, September 26, 2020 at Hagi Funeral Home, Streator.  Mass of Christian Burial will follow at 11:30 AM Saturday at St. Michael the Archangel Church, Streator.  Burial will be in St. Mary’s Cemetery.  Memorials may be made to St. Michael’s School or Marquette Academy.

To order memorial trees or send flowers to the family in memory of Sherman Weiss, please visit our flower store.