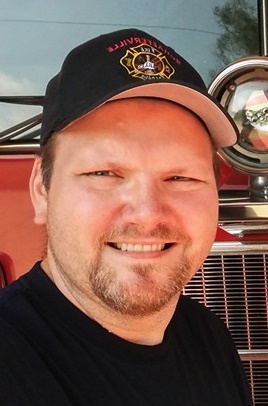 A visitation will be held from 4-7 PM Wednesday at the Hagi & Baker Funeral Home in Streator.  Funeral services will be held at 11:30 AM Thursday at the funeral home.  Msgr. Philip Halfacre will officiate.

Interment will be in St. Stephen’s Cemetery in Streator.  The Schaeferville Volunteer Fire Department will serve as pallbearers and do an honorary escort to the cemetery.

He was born April 19, 1973 in Streator to Roseann Kauth.  He was formerly married to Wilma Hasty.  She survives.

He is also survived by daughters:  Ashley Vice of Streator and Cici; a grandson Bentley Williams and another grandchild on the way; an aunt Marge Kauth of Streator and cousins, Judy Henson and Jamie Lurz and families.

He was preceded in death by his mother and good friend Carl Young.

Ron was an E.M.T. having worked for Lee Ambulance, St. Mary’s Ambulance and A.M.T. in Streator.  He was now serving on the Schaeferville Volunteer Fire Department where had been Fire Chief.  He was employed by the Paradise Riverboat Casino in East Peoria.

He has also served on the Streator E.S.D.A.

Memorials may be directed to the family.

Online condolences, remembrances and his video tribute can be seen at www.hagifuneralhome.com

To order memorial trees or send flowers to the family in memory of Ronald Kauth, please visit our flower store.