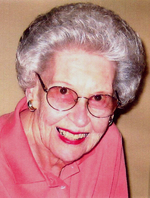 STREATOR-  Roberta “Bobbie” Patton 91 of La Vida Real, El Cajon California , formerly of Streator died Friday (March 15, 2013) in California.
Private family funeral services will be held at Hillcrest Memorial Park Cemetery, Streator.
Hagi Funeral Home, Streator is in charge of arrangements.
Mrs. Patton was born Sept. 8, 1921 in Streator the daughter of Earle “EB” and Gladys (Carter) List. She married Larry Patton in 1948. He preceded her in death in 1998 in San Diego CA.
Bobbie was a homemaker. She attended Greeley school and was a graduate of Streator High School, class of 1938. She was a veteran of WWII serving with the US Army in the Pacific as a nurse.
She is survived by one daughter, Marcia (Jerry) Butler, of Ponte Vedra Beach FL also surviving is one niece and five nephews along with several great nieces and nephews.
She was preceded in death by her parents, husband, three sisters, Joanna Mayfield, Elizabeth “Libby” Rabbitt and Virginia “Ginny” Conness.
Memorials may be made to the donor’s choice.

To order memorial trees or send flowers to the family in memory of Roberta Patton, please visit our flower store.