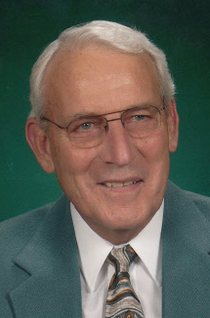 Streator – Robert W. Miller Sr., age 84 of Streator, died Sunday, July 20, 2014 at the Mendota Lutheran Home.
Mass of Christian Burial will be held at 11:30am Thursday at St. Michael the Archangel Church - 513 South Shabbona Street, Streator, with Monsignor Philip Halfacre officiating.  Visitation will be held from 4:00pm – 7:00pm Wednesday at the Hagi Funeral Home with a prayer service at 4:00pm.  Burial with full military honors will be conducted by members of the American Legion Post #217 and Veterans of Foreign Wars Post #1492 at St. Mary’s cemetery in Streator.
Mr. Miller was born January 11, 1930 in Streator the son of Joseph A. and Eleanor (Krebs) Miller.  He married Norma Pozzie April 14, 1956 in Toluca.  She preceded him in death June 23, 1998.
He attended St. Mary’s grade school and Streator High School and was one of the best basketball players to ever wear a Bulldog jersey.
He served 4 years in the United States Air Force during the Korean War and was stationed in Germany.
Bob had been employed as a mail carrier in Streator from 1960-1990.  The majority of this time was spent delivering mail to his beloved patrons on Riverside.
He was a member of the former Immaculate Conception Church and currently a member of St. Michael the Archangel Church, member of the Knights of Columbus, life member of Veterans of Foreign Wars Post #1492, past member of the church choir, participated in VFW bowling league serving as secretary for many years, officiated grade school basketball for several years, and had been active with the Lutheran Brotherhood ramp builders, as well as being an avid Chicago White Sox fan.

His constant faith in the Lord guided him throughout his lifetime.  His family meant everything to him.  He was a devoted husband, father and grandfather who will be greatly missed.

To order memorial trees or send flowers to the family in memory of Robert Miller Sr., please visit our flower store.