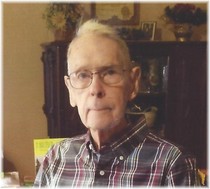 Robert Joseph Bonebrake, 87, of Streator, passed away Saturday July 9, 2016, 9:00 am at Pontiac Healthcare and Rehab Center, Pontiac.
Graveside services will be held 10:30 am Tuesday at Moon Point Cemetery, Streator. Dick Leonard will officiate. Full military rites will be accorded by the Streator American Legion Post. Memorial may be made to the Streator Meals on Wheels program. Hagi Funeral Home is in charge of arrangements.
Robert was born September 16, 1928 in Streator, IL to William Walter and Eva (Baldwin) Bonebrake.
Surviving are his sister, Darlene (Robert) Bohm, of Cornell, his cousin’s, Hazel Craddock, of Oklahoma City, OK and Judith Ritchie, of Dallas, TX, two nephews and two great-nephews.
His parents, and his faithful companion, Susie, the calico cat, preceded him in death.
Robert graduated from Streator High School, Class of 1946.
He served his country in the National Guard from 1950 to 1953, then in the United States Army from 1953 to 1956. While in the Army he was an instructor, teaching Guided Missile classes.
Robert was a HAM radio operator. He authored a book called “Voices in the Air, Fascination of Radio”.
He worked for the Anthony Company in his early years as a draftsmen. He later worked for Howard Hughes Aircraft, later retired from General Electric in Bloomington.
He was a member of the Streator American Legion and a lifetime member of ARRL.
Robert was very proud to be from Streator, he dedicated a wall in his home to Pluto.
He was very reliant upon his neighbors, for which he was thankful.
To order memorial trees or send flowers to the family in memory of Robert Bonebrake, please visit our flower store.