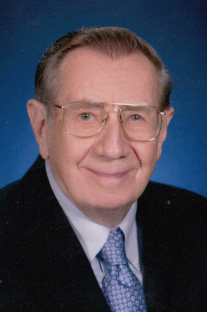 STREATOR-  Orris M. Reynolds 86 of Streator died Thursday afternoon (Jan. 1, 2015) at St. Francis Medical Center, Peoria.
Funeral services will be held at 2:00 PM Sunday at Hagi Funeral Home, Streator with Rev. Jerry Haley, officiating. Visitation will be from Noon-2:00 PM Sunday at Hagi Funeral Home.
Burial will be in Riverview Cemetery, Streator.
Mr. Reynolds was born Jan. 17, 1928 in Streator the son of Theophilus and Stella Pearl (Umphenour) Reynolds. He married Lois Tucker Jan. 7, 1952 in Dana. She preceded him in death, Feb. 11, 2007.
Orris had been employed at P & A Auto Parts, Streator from his high school days until his retirement in 1993. He was a member of First United Methodist Church, Streator. He attended Streator grade schools and was a graduate of Streator High School, class of 1946. Orris served with the Illinois National Guard.
He is survived by two sons, Daniel (Diana) Reynolds, Streator and James (Loretta Ross) Reynolds, Flossmoor, three grandchildren, Matt Reynolds, Casey (Ryan) Cloud and Brian Reynolds, two great grandchildren, Griffin and Graceanne Cloud and one sister, Norma Sulzberger, Streator.
He was preceded in death by his parents, wife and one brother, Theophilus “Junior” Reynolds.
Pallbearers will be family and friends.
Memorials may be made to First United Methodist Church or to the donor’s choice.

To order memorial trees or send flowers to the family in memory of Orris Reynolds, please visit our flower store.