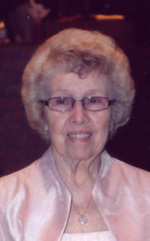 STREATOR-  Mary Ann Spencer 81 of Streator died Friday morning (July 20, 2012) at her home.
Mass of Christian Burial will be held at 11:30 AM Tuesday at St. Michael the Archangel Church, Streator with her nephew, Monsignor Brian Brownsey, officiating. Visitation will be held from 4:00-7:00 PM Monday at Hagi Funeral Home, Streator with the Rosary recited at 4:00 PM Monday. Burial will be in St. Stephen’s Cemetery, Streator.
Mrs. Spencer was born Aug. 28, 1930 in Streator the daughter of Andrew and Mary (Soltis) Mayerchin. She married Dale R. “Red” Spencer, June 6, 1953, at St. Stephen’s Church. He preceded her in death Nov. 23, 2007.
Mary Ann had been employed at the former Lipton Tea Co. and later was a beautician for many years at the Merle Norman Studio both of Streator. She was a member of the former St. Anthony’s Church and currently a member of St. Michael the Archangel Church, as well as a member of St. Michael the Archangel Altar and Rosary Society and a member of the Moose Auxiliary. She attended St. Stephen’s Grade School and was a graduate of Streator High School class of 1949 and was also a beauty school graduate.
She is survived by two daughters, Mary Lynn (Dan) Breeden, Streator, Cheryl (Jim) Redman, Leander TX, one son, Dale A. (Kimberly) Spencer, Marseilles, six grandchildren, Stephanie (Efren) Orozco, Brooke and Drew (Marissa) Spencer, Jacob (Lindsay) Vickers and Aaron and Austin Redman, three great granddaughters and two sisters-in-law, Marion Mayerchin and Jean Mayor.
She was preceded in death by her parents, husband, one great grandson, Cruz Orozco, one sister, Leona Murillo, five brothers, Steve, Ervin, Louis and Alvin Mayerchin and Edward Mayor.
Pallbearers will be family and friends.
Memorials may be made to the donor’s choice.

To order memorial trees or send flowers to the family in memory of Mary Spencer, please visit our flower store.