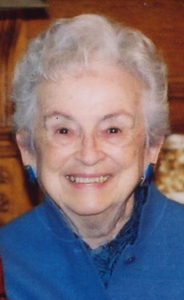 STREATOR – Marguerite Elias Arenz of Streator passed away on Sunday, August 18, 2013.  Mass of Christian Burial will be celebrated Wednesday, August 21, at 11:30 a.m. at St. Michael the Archangel Church in Streator.  Visitation will be from 9:00 to 11:00 a.m. on Wednesday at Hagi Funeral Home in Streator.  Burial will be in Riverview Cemetery.
The daughter of Harry William and Marguerite (O’Connor) Hess, Marguerite was born and reared in Ottawa.  She came to Streator as the wife of Lester N. Elias, a partner in the Elias Funeral Home for thirty years until his death in 1973.  In 1977, she and Carl Arenz, a Streator businessman, were wed.  Carl died in 1996.
She is survived by three children: Lester N. (Patricia) Elias of Shawnee, KS; Mary Jane Elias (Fred Ferlic) of South Bend, IN; and Marguerite M. Elias of Chicago, IL.  Her grandchildren are Matthew Elias, Nora Bloom, Mary Jane Anon and Julia Kanczuzewski.  She was the loving great-grandmother of Sofia and Luciana Anon, Nolan Kanczuzewski, and her recent namesake Marguerite Kanczuzewski.
Marguerite was preceded in death by her husbands, her parents, her sister Rita Nagle and her brother William Hess.
She cherished her roles as a wife, mother, grandmother and great grandmother.  She was a founding member of the Saint Mary’s Hospital Auxiliary and was active in the organization for fifty years.  An avid bridge player, each Monday found her playing in the duplicate games at the Elks Club.  She loved meeting and helping people and made new friends wherever she went.
Honorary pallbearers will be her cousins Jack and Jerry Cosgrove, along with Dick Kerr.  Pallbearers will be Mauricio Anon, Randy Baumrucker, Bob Dieken, Fred Ferlic,  T.J. Kanczuzewski, Michael Nagle and Bill Stevenson.
Memorials may be made to the Juvenile Diabetes Research Foundation or the National Hemophilia Foundation.

To order memorial trees or send flowers to the family in memory of Marguerite Arenz, please visit our flower store.