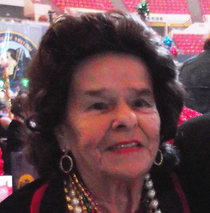 STREATOR-  Kara Ann Stevenson 83 of Lafayette Louisiana, formerly of Streator, died Monday (Feb. 16, 2015) at General Hospital, Lafayette.
Funeral services will be held at 11:00 AM Monday at Hagi Funeral Home, Streator with Rev. Jerry Haley, officiating, the Eastern Star ritual will precede the funeral services. Visitation will be from 9:00-11:00 AM Monday at Hagi Funeral Home. Burial will be in Allen Township Cemetery, Ransom.
Mrs. Stevenson was born May 14, 1931 the daughter of Ernest and Charlene (Reece) Way. She married Donald S. Stevenson Sr. Sept 14, 1953 in Tucson AZ. He preceded her in death May 1, 1986.
Kara was a homemaker and a former member of First United Methodist Church, Streator. She was a 50 year member of Order of the Eastern Star Lodge # 301, Streator and the White Shrine, serving as the Worthy Matron in 1969, 1975, 1977, 1979, 1982, 1985, 1989, 1998, 2001, 2003, 2006 and 2007 and was the Worthy High Priestess in 1972 and 1976, she was also a member of Streator Elks Lodge, # 591.
She is survived by three sons, Donald Stevenson Jr., Lafayette LA, Mark (Lori) Stevenson , Forest Lake MN and Scott (Carrie) Stevenson, Colleyville TX, also surviving are two grandchildren, Hunter and Camille Stevenson.
She was preceded in death by her parents and husband.
Pallbearers will be Donald Jr., Mark, Scott and Hunter Stevenson, Doug Way and Nick Mueller.
Memorials may be made to the donor’s choice.

To order memorial trees or send flowers to the family in memory of Kara Stevenson, please visit our flower store.