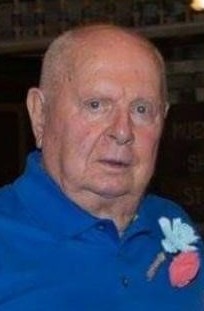 Funeral Services will be 11:00 AM Tuesday, October 19, 2021 at Hagi Funeral Home, Streator.  Interment will follow in Riverview Cemetery with military rites performed by the Leslie G. Woods American Legion Post 217 and the Veterans of Foreign Wars Post 1492.  Visitation will be from 9:00 to 11:00 AM Tuesday prior to services at the funeral home.  Memorial contributions may be made to the Streator Elks Lodge or the Streator YMCA.

He was also preceded in death by his parents; a sister, Mary Kmetz; and a brother, Wayne Voorhees.

Jack served in the United States Navy.  He retired from the Streator Coca-Cola Company, working in Sales in the Ottawa area.

Jack was a member of the First United Methodist Church, the Streator Elks Club, the VFW and the Streator YMCA.

To order memorial trees or send flowers to the family in memory of John Voorhees, please visit our flower store.