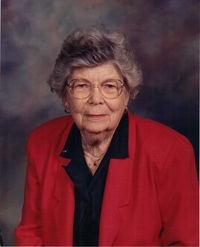 Helen C. Dice, 97 of Phoenix, Arizona passed away peacefully on October 23, 2013.  She was born January 10, 1916 in Manville, Illinois to Kenneth and Sadie (Pearce) Dice. Helen moved to Chicago and worked for State Farm Insurance before moving to Phoenix in 1957. She worked as a bookkeeper for Sperry Flight Systems until her retirement in 1978.
Helen is survived by her sister, Lois (Dice) Cronk of Phoenix (previously of Streator, IL) and Sisters-In-Law: Ann (Lloyd) Dice of Tucson, AZ and Elaine (John) Dice of Marana, AZ
She was preceded in death by her parents, six brothers and sisters; Fredrick (Fritz) Dice, Dora (Dice) Wargo, Jean (Dice) Breiholz, Lloyd Dice, Joanne (Dice) Roach, John Dice and 8 nieces and nephews.
Helen had 25 nieces and nephews who thought the world of her and kept in close contact through the years. She enjoyed traveling and golf into her eighties.  She also enjoyed the daily crossword puzzle, in ink.
Helen was proud to be a member of the First Methodist Church in Phoenix.
Interment at New Michigan Cemetery in Manville, IL, at a later date.

To order memorial trees or send flowers to the family in memory of Helen Dice, please visit our flower store.