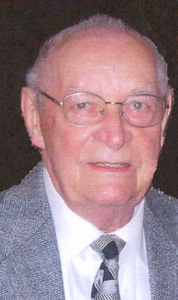 STREATOR-  Harold R. Reihl 87of Streator died Tuesday evening (May 7, 2013) at Heritage Health, Streator.
Funeral services will be held at 2:30 PM Monday at Hagi Funeral Home, Streator with Sister Laura Northcraft, officiating. Visitation will be held from 4:00-6:00 PM Sunday and from 1:30-2:30 PM Monday at Hagi Funeral Home. Burial with full military rites conducted by members of American Legion Post # 217 and Veteran’s of Foreign Wars Post # 1492 will be in St. Anthony’s Cemetery, Streator.
Mr. Reihl was born Feb. 17, 1926 in Streator the son of Francis and Martha (Plain) Reihl Sr. He married Irene Elias, Feb. 6, 1951 at St. Stephen’s Church, Streator. She preceded him in death Jan. 9, 2010.
Harold was a mail carrier in Streator and later a rural mail carrier from April 1960-January 1988. He also was a salesman for Bullock Garages for many years. He was a member of the former St. Anthony of Padua Church, Monsignor George Dzuryo Council Knights of Columbus, both of Streator, Rural Letter Carriers Association and was an avid golfer. He was a former member of American Legion Post # 217 and Veteran of Foreign Wars Post # 1492, both of Streator. He was a veteran of WWII serving in the Army Air Force as a crewman and tail gunner on a B-17 and while en route to Europe, much to everyone’s relief, the war ended.
He is survived by three daughters, Katherine “Kathy” (Rex) Hawthorne, Streator, Mary Jo Weber, Geneseo, and Karen (Rich) Perjak, Streator, one son Harold “Chip” (Kimberly) Reihl, Eureka, many grandchildren and great grandchildren survive along with one brother, Vincent (Annmarie) Reihl, Streator.
He was preceded in death by his parents, two sisters, Magdalen Maubach and Mary Margaret Reihl, two brothers, George and Francis Reihl Jr., one granddaughter Amanda Reihl and two great grandchildren.
Memorials may be made to Drew’s Faithful Feet, in care of the family.

To order memorial trees or send flowers to the family in memory of Harold Reihl, please visit our flower store.