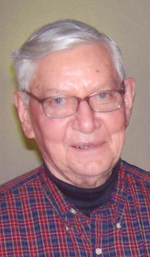 STREATOR-  George J. Tomasko Jr.  85 of Streator died Friday evening (Mar. 1, 2013) at the Illinois Veteran’s Home, LaSalle.
Funeral services will be held at 11:00 AM Thursday at Hagi Funeral Home, Streator with Rev. Jerry Haley, officiating. Visitation will be from 9:00-11:00 AM Thursday at Hagi Funeral Home. Burial with full military rites conducted by members of American Legion Post # 217 and Veteran’s of Foreign Wars Post # 1492 will be in Phillips Cemetery, rural Streator.
Mr. Tomasko was born Feb. 25, 1928 in Streator the son of George and Mabel (Ahrens) Tomasko Sr.
George had been a mail carrier for thirty five years with the US Post Office, retiring in 1987. He was a member of the former Grace United Methodist Church, a life member of both the American Legion Post # 217, Veteran’s of Foreign Wars Post # 1492 all of Streator and the Postal Carriers Union. He attended Streator grade schools and was a graduate of Streator High School class of 1946.  He was a veteran of Korean War serving overseas in the US Army where he was awarded the Bronze Star Medal.
George was an avid fisherman, hunter and in the early days a trapper. He enjoyed coin collecting, his garden, working in his yard, picking raspberries, bowling and the Chicago Bears and White Sox.
He is survived by one sister, Alice (Wayne) Perry, rural Streator and one brother, Raymond (Suzanne) Tomasko, Claremore OK, one sister-in-law, Barbara Tomasko, Streator, along with several nieces and nephews.
He was preceded in death by his parents, two brothers, Robert and Norman Tomasko and a sister-in-law, Carol Tomasko.
Pallbearers will be family and friends.
Memorials may be made to the Illinois Veteran’s Home, LaSalle.

To order memorial trees or send flowers to the family in memory of George Tomasko Jr., please visit our flower store.