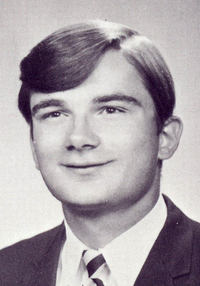 STREATOR-  Fred Paul Bodziuch 62 of Streator died Sunday evening (June 9, 2013) at St. Francis Medical Center, Peoria.
Mass of Christian Burial will be held at 9:30 AM Friday at St. Michael the Archangel Church, Streator with Monsignor Philip Halfacre, officiating. Visitation will be from 5:00-7:00 PM Thursday at Hagi Funeral Home, Streator with the Rosary recited at 5:00 PM. Burial will be in St. Mary’s Cemetery, Streator.
Mr. Bodziuch was born May 23, 1951 in Streator the son of Edward and Pauline (Marek) Bodziuch.
Fred had been employed as a youth counselor at the LaSalle County Detention Home and also the LaSalle County States Attorney’s Office, Herman’s Sporting Goods, and the Wells Fargo Co. He was an active member and altar boy of the former St. Casimir’s Church where he sang in the choir and was a member of the Altar and Rosary Society. Fred was a board member of Polish National Alliance, Streator where he served as the treasurer and an officer of Council 19 Polish National Alliance. He was a volunteer with many groups in the area including the adult daycare at St. Mary’s Hospital for ten years. He excelled in playing the coronet and several other instruments in the Streator High School Band where he won the John Phillip Sousa Award; he was first chair his freshman year in the Southern Illinois University Band. He was a social member of the Veterans of Foreign War Post # 1492 and American Legion Post # 217 and was an avid bowler. He attended Streator schools and was a graduate of Streator High School, class of 1970 and also a graduate of Southern Illinois University, Carbondale with a Bachelor of Science Degree in Administration of Justice. Fred always enjoyed a good conversation with friends.
He is survived by two sisters, Barbara Ann (Alex) Rudock, Roselle and Patricia (Vernon) Kessler, Titusville FL and one brother, Edward (Mila) Bodziuch, Soldotna Alaska, one niece, four nephews, one great niece and one great nephew also survive.
He was preceded in death by his parents.
Pallbearers will be family and friends.
Memorials may be made to the donor’s choice.

To order memorial trees or send flowers to the family in memory of Fred Bodziuch, please visit our flower store.