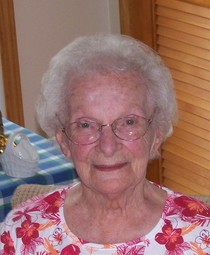 Evelyn E. Hichborn, 102, of Streator, passed away at 12:43 a.m. Saturday, February 20, 2016 at Heritage Health in Streator.
A Mass of Christian Burial will be 9:30 a.m. Tuesday at St. Michael the Archangel Catholic Church with Fr. Jacob Rose officiating. Burial will follow at St. Mary’s cemetery in Streator. Visitation will be 4:00 to 7:00 p.m. Monday at Hagi Funeral Home, Streator and from 8:30 to 9:15 a.m. Tuesday at the funeral home. Memorials may be made to a charity of the donor’s choice.
Evelyn was born August 29, 1913 in Streator the daughter of Andrew and Anna Stritchko Lucas. She married Clarence Hichborn on February 13, 1934 in Streator. He died March 17, 1975.
Surviving are one daughter Mary Ellen (Dave) Beck of Charlotte, MI; three sons Frank Hichborn of Pangburn, AR, Mike (Jean) Hichborn of Bellevue, NE, and Rick Hichborn of Streator; She has fourteen grandchildren, Numerous great grandchildren, and four great-great grandchildren.
She was also preceded in death by her parents, three sons John in infancy, Gerry, and Larry; two brothers Jack and Frank Lucas, and one sister Grace Drysdale.
Evelyn was a member of Immaculate Conception now St. Michael the Archangel Catholic Church. She helped with the Canteen during WWII. She worked in the school cafeteria at Streator High School for 18 years. Evelyn enjoyed antiquing, garage sales, painting, and collecting glass baskets. She also enjoyed spending time with her family and friends.
To order memorial trees or send flowers to the family in memory of Evelyn Hichborn, please visit our flower store.