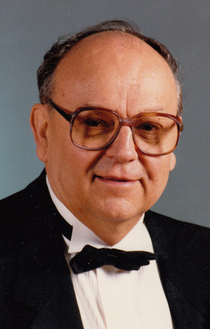 STREATOR-  Eugene W. “Gene” Washko 83 of Streator died Monday evening (Dec.15, 2014) at St. Mary’s Hospital, Streator.
Mass of Christian Burial will be held at 9:30 AM Saturday at St. Michael the Archangel Church, Streator with Father Jacob Rose, officiating. Visitation will be from 5:00-7:00 PM Friday at Hagi Funeral Home, Streator with the Rosary recited at 4:45 PM Friday. Burial will be in St. Stephen’s Cemetery, Streator.
Mr. Washko was born May 16, 1931 in Streator, the son of John and Julia (Estock) Washko. He married Rose Mouradian Aug. 2, 1969 at St. Stephen’s Church. She preceded him in death Sept. 5, 2006.
Gene had been employed as a history teacher in the Peoria School system and later was in partnership with his brothers in Washko’s Bargain Store. He was a member of the former St. Stephen’s Church and currently a member of St. Michael the Archangel Church, Knights of Columbus and Jednota Lodge, all of Streator. He attended St. Stephen’s School and was a graduate of Streator High School, class of 1950 and received his Master’s degree from Bradley University in 1956.
Gene was a loving family man who never met a stranger and will be greatly missed.
He is survived by two sons, Rick (Shelley) Washko, and Ron (Sylvia) Washko both of Bloomington, three grandchildren, Matthew, Samantha and Paloma Washko, one great granddaughter, Micaella Washko,  two brothers, Richard and Robert Washko, both of Streator, one sister, Monica (Earl) Oak, Seneca, S. Carolina.
He was preceded in death by his parents, five sisters, Rita Washko, Lucille Martin, Evelyn McCauley, Irene Sisk Evers and Viola Walsworth, four brothers, George, John, Frank and Albert Washko.
Pallbearers will be family members.
Memorials may be made to the Myasthenia Gravis Foundation or to the donor’s choice.

To order memorial trees or send flowers to the family in memory of Eugene Washko, please visit our flower store.