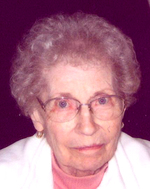 STREATOR—Elizabeth G. Barber 98 of Sikeston Missouri, formerly of Streator died Thursday evening (Jan. 31, 2013) at the Sikeston Convalescent Home, Sikeston MO.
Private family funeral services will be held at 11:00 AM Tuesday in the chapel at Hillcrest Memorial Park Cemetery, Streator. There will be no visitation. Hagi Funeral Home, Streator is in charge of arrangements.
Mrs. Barber was born July 22, 1914 in Streator the daughter of William and Effie (Wirewick) Warwick. She married Harry G. Barber, Dec. 16, 1944 in Streator. He preceded her in death May 16, 1986.
Elizabeth had been a concert pianist and was a private piano and organ teacher in the Streator area. She was a former member of Christ Episcopal Church, Streator where she served as the church organist and was also the organist for First United Methodist Church, Streator. She attended Streator schools and was a graduate of Streator High School, class of 1932.
She is survived by one daughter, Mary (Bill) Mitchell, Sikeston MO., one son Timothy George (Sally) Barber, Austin TX., eight grandchildren, eleven great grandchildren, one great great granddaughter and one sister, Edith Baker, Streator.
She was preceded in death by her parents, husband, one grandson William Timothy Mitchell in infancy, three sisters and two brothers.
Pallbearers will be family members.
Memorials may be made to the donor’s choice.

To order memorial trees or send flowers to the family in memory of Elizabeth Barber, please visit our flower store.