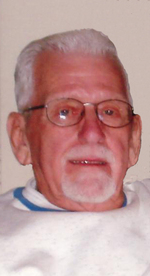 STREATOR-  Donald E. Martin 83 of Streator died Tuesday afternoon (Apr; 16, 2013) at his home.
Funeral services will be held at 1:00 PM Saturday at Hagi Funeral Home, Streator with Rev. Jerry Haley, officiating. Visitation will be from 4:00-7:00 PM Friday at Hagi Funeral Home. Burial with full military rites conducted by members of American Legion Post # 217 and Veterans of Foreign Wars Post # 1492 will be in Hillcrest Memorial Park Cemetery.
Mr. Martin was born Sept. 20, 1929 in Topeka Kansas, the son of Dwight and Emily (Welter) Martin. He married Charlene Holland, Dec. 23, 1950 in Streator. She preceded him in death Apr. 21, 1982.
Don had been employed by GTE in Streator and Bloomington, retiring in 1983. He was a veteran, serving with the US Army during the Korean War.
He is survived by one granddaughter, Melissa “Missy” (Scott) Daugherity, Joliet, two great grandsons, Dylan and Breven Daugherity, also surviving is Mike (Kam) Pollett, Bloomington whom he raised as a son and his two children, Brady and Kylie as well as several nieces and nephews.
He was preceded in death by his parents, wife, one son Gary Martin, two sisters, Virginia Morin and Delores Spencer, two brothers, Richard and Robert Martin.
Pallbearers will be Dylan and Breven Daugherity, Ryan, Troy, Kyle and Cory Hart. Honorary Pallbearers will be Brady and Kylie Pollett.
Memorials may be made to the donor’s choice.

To order memorial trees or send flowers to the family in memory of Donald Martin, please visit our flower store.