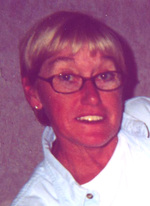 STREATOR- Dena M. Senko 59 of Streator died Friday evening (May 18, 2012) at St. Mary’s Hospital, Streator.
A Celebration of Life Service will begin at 5:00 PM Wednesday at the Knights of Columbus Hall, 806 Oakley Ave. Streator, with a Service of Remembrance at 7:00 PM Wednesday evening. Hagi Funeral Home, Streator is in charge of arrangements.
Mrs. Senko was born Jan. 22, 1953 in Streator the daughter of John and Shirley (Montgomery) Reynolds. She married Michael Senko, Sept. 18, 1971 at St. Stephen’s Church, Streator. He survives.
Dena and her husband owned and operated Softy’s Computer Software which was the first computer software store in Streator. They later owned and operated Steve’s Market, Streator. She also had been employed at St. Mary’s Hospital and B& R Grocery prior to her illness. She had been active with the Streator Youth Football and with various sports programs at Woodland School. She attended St. Anthony grade school and was a graduate of Streator High School, class of 1971. She was of Catholic faith.
She is survived by her husband Michael of Streator, two sons, Michael (Kelly) Senko, Bolingbrook, Joe (Ellen) Senko, Wenona, her parents, John and Shirley Reynolds, Streator, five grandchildren, Logan, Mya, Layton, Ryan and Carter Senko, one sister, Robin Rients, Varna, three brothers, Gary Cripe, Rocky (Cheri) Reynolds and Gary John (friend Karla) Reynolds, all of Streator.
She was preceded in death by her grandparents and one sister Jeanette Vogel.
Memorials may be made to the Arthritis Foundation at arthritis.org  or mailed to Arthritis Foundation 35 E. Wacker Dr. , Suite 2260 Chicago IL 60601 (312) 372-2080.
To order memorial trees or send flowers to the family in memory of Dena Senko, please visit our flower store.