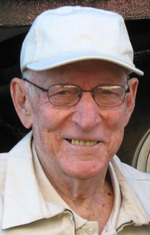 Ben had been employed by the Nickel Plate, New York Central, Penn Central and Conrail railroads, from 1945-1990. He also served as caretaker of the Defenbaugh Cemetery for many years. He was a member of the former Immaculate Conception Church, Streator and St. Michael the Archangel Church, Garland Texas. Ben had previously held the office of Financial Secretary at the Streator Knights of Columbus where he was a 4 th Degree member. He was active in Livingston County and Reading Township politics, holding the office of Reading Township Supervisor for several years.

Memorials may be made to St. Jude Children’s Research Hospital.

To order memorial trees or send flowers to the family in memory of Benjamin DeZarn, please visit our flower store.